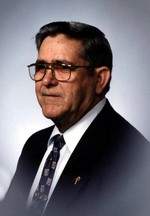 Copy the text below and then paste that into your favorite email application.

Fred F. "Henry" Harris, 87, of Ashland, passed away Friday, September 15, 2017, at his residence with his beloved family by his side.
He was born January 7, 1930, in Burnaugh, KY, a son of the late John Crit Harris and Lillie Jane Prater Harris. In addition to his parents, he was preceded in death by several brothers and sisters.
Fred was a member of First Baptist Church, Russell. He was past master of Rush Masonic Lodge 715 F&AM, Rush Eastern Star 546 and El Hasa Shrine. He was a 32nd degree Mason, a KY Colonel and KY Admiral, former Ashland National Little League Coach and Financial Secretary of Carmen's Union Local 344. He was an avid fan of the Cincinnati Reds and UK Basketball. He was a member of Whirlaways Square Dancing Club, volunteered at Our Lady of Bellefonte Hospital and retired after many years of service from the Raceland Car Shops.
Those left to cherish his memory include his loving wife of 69 years, Audrey Mullins Harris of Ashland; sons, Stephen Harris (Cheryl) of Rush, KY, and Fred F. Harris, Jr. (Kim) of Flatwoods, KY; daughters, Sharon Conley (Wayne) of Ashland; Kathy Heineman (Richard) of Winchester, KY, Pam Smith (Eddie) of Ashland, and Pat Morrison (Russ) of Winchester, KY; sisters, Catherine Franklin of Wurtland, KY, and Patty Smith (Bill) of North Webster, IN; 16 grandchildren, 24 great grandchildren and a host of loving extended family members and dear friends.
Funeral services will be held 1 p.m. Tuesday, September 19, 2017, at Steen Funeral Home 13th Street Chapel with Pastor Wayne Kuhner and Roger McCaleb officiating. Burial will follow in Golden Oaks Memorial Gardens.
Visitation will be from 6 until 9 p.m. Monday, at the funeral home with a Masonic service being held at 7:30 p.m. by the Rush Masonic Lodge 715 F&AM.
In lieu of flowers, donations may be made to First Baptist Church, Russell or to Community Hospice.