In today’s world we are bombarded by ads for services by companies promising that they are the answer to your need; but sometimes you need something that you really don't see advertisements for such as a cemetery.

Sadly, in January, my family had that need. Thankfully my parents had thought enough into the future to purchase plots so the first need was met.

We had no idea how any of this process worked (most people are oblivious to cemeteries until they know someone buried there).

The rest of the questions are the reason I am writing this letter.

The people that worked with us from Golden Oaks were so very kind and patient and considerate and professional. I realize it is a business but they called and checked on us even after several weeks had passed and the check had cleared. They still called and asked if there was anything we needed.

Debbie called and kept us informed when the headstone arrived, when it would be set and later called to make sure we were pleased with it.

I just want to say thanks for making a very difficult time a little easier. 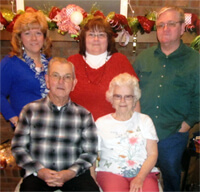 As an owner of property at Golden Oaks, our family has had property for many years, we are well pleased with the property, the up keep is above reproach, and the personal are very concerned about the customers and are caring people.

My Father and Mother have been buried at Golden Oaks for years and their graves have been well taken care of, ALWAYS!

I’m writing to state that Golden Oaks has always been cared for. My family has been here for more than 55 years.

I am writing in response to the front article of the Independent on Jan. 29, 2008. I have friends and relatives here at Golden Oaks and I have been in the cemetery many times. I have never seen the mentioned cemetery neglected. As far as I am concerned, they do a great job at Golden Oaks. I have found myself to be very happy with the personnel and grounds men. They have helped me with any thing I ever needed. I had one free lot at Ashland Cemetery and I chose to come to Golden Oaks, for it’s beauty and maintenance.

In regards to sunken graves, it doesn’t matter what cemetery it is, caretakers can’t fight nature. We’ve had a lot of rain and the ground is very wet.

My husband was buried in March on a Tuesday & Saturday, we had a bad rain, Sunday, I went & it had sunk from rain coming down the hill. I didn’t even report it yet & Monday morning, it had already been filled in. They’re very good at fixing graves.

Also, they’ve been very nice about the decorating of graves. Many friends & family have left things & it means a lot to me that they allow this.

I visit almost daily & caretakers are always out busy in the coldest days & rain.

Our gravesites at Golden Oaks Memorial Gardens have always been properly taken care of. Several areas of the cemetery have lots where our family members are buried. Their graves have always been given the respect and care they should be given.

It’s a natural occurrence that graves sink. Our aunt’s grave sank. We notified the office and it was taken care of in a timely manner.

I was very disturbed when I read the article in the paper against Golden Oaks Memorial Gardens. I have several relatives and also a son who is buried there and I have not had one problem with that cemetery.

I think I am adult enough to understand that Mother Nature is harsh and we have to work with these elements daily. Just drive around our county and look at all the garbage around homes that are not well kept. Yes I have seen flowers blown from vases and I will pick them up and put them in vases that are empty. I may not have put them in the right vase, but I also understand the grounds keepers don’t know where they come from either.

My son’s grave settled also, but they took care of it without me saying a word. I totally understand that my son’s grave is not the only grave in that cemetery. Anytime you disturb the ground it’s going to settle. We live in an area were the weather is constantly changing. When Mother Nature strikes with a vengeance it takes time to put everything back together. As far as the flowers blowing out of vases, I suggest that you put them in properly and the wind won’t blow them out. Anything that you put on the graves needs to be secured. Marbles work real good in the vases for holding flowers.

My family & I have always been pleased with the care our loved ones have received at Golden Oaks for almost 50 years.

I am writing in response to The Independent’s story on Jan. 29 in which Neva Greene and Marcellia Sharon Lother voiced their complaints with Saber Management, LLC.

Many of my loved ones are buried in Rose Hill Burial Park, dating as far back as 1949 and as recently as December of 2004. I expect my loved ones graves to be cared for and respected in every way possible.

Whenever I have visited over the years, I have gone to the Rose Hill staff, Skyla Short. I’ve been treated with respect and every concern of mine has been resolved to the best of their ability. We all know that it’s only natural for the ground to freeze and thaw in the winter, causing some settling problems. When I find a marker that’s sinking or see the ground settling, I know that once I report the problem it will be taken care of. When returning at a later date, I find the problems corrected.

When I visit my loved ones’ graves -- which I do frequently -- I sometimes see tracks where a backhoe was close to the marker. However, the next time I visit, I will find that those tracks have been filled, reseeded and covered with straw.

If done correctly, using a backhoe to dig a grave is progress compared to the day when graves were dug by hand.

I’ve found that Damon Melcho of Saber Management to be caring and respectful. I personally know that when you take a problem to him, you can rest assured that he will do exactly what he tells you he will do. He is a man of his word.

I’ve found that Damon Melcho of Saber Management to be caring and respectful. I personally know that when you take a problem to him, you can rest assured that he will do exactly what he tells you he will do. He is a man of his word.

I wish to offer this testimonial letter conveying my sentiments about how professional and compassionate your staff has been towards my family through the years. From the meticulous job the grounds keeping staff does to maintain a dignified resting place for our loved ones to the understanding expressed by the office staff at one’s most vulnerable time, I could not be more reassured that I have chosen a truly beautiful memorial garden for my wife and baby grandson. I am always impressed by the manicured grounds of the expansive park. It is quite evident how devoted and committed each staff member must be to the preservation of the memory of our departed loved ones. The pastoral setting offers one a refuge for quiet reflection and meditation. Thank you all for your efforts, they are genuinely appreciated.

We are always interested in hearing from the families that we serve.  Please take a moment to let us know how well we served you in your time of need. We very much appreciate your feedback.

Directions
Locate a Loved One

A year of daily grief support

Our support in your time of need does not end after the funeral services.  Enter your email below to receive a grief support message from us each day for a year.  You can unsubscribe at any time.